She knew better than to be out walking alone so late in the evening, especially through the woods. But Jen had lost track of the time and was running late, and cutting through the woods was quicker.

As she hurried along the path, she could hear her mother’s angry voice in her head, berating her for being out so late.

The sound of a twig snapping made Jen pause in her step and catch her breath. She listened carefully and peered into the trees, trying to make out in the growing darkness what had caused the sound. Had it been a small animal? A larger animal? A person?

Jen jumped suddenly at the sound of large paws padding along the path behind her, and she turned around quickly to see what was coming. Was it a wolf? She’d heard there might be some in the area. Or maybe it was a cougar? There were supposed to be some around, too.

She sighed and smiled when she saw it was only a yellow Labrador.”Oh, it’s only you, Cooper,” she said, and the dog wagged its tail and ran up to her. “Mom sent you out to fetch me, did she?” she asked as the dog stood looking up at her with a big, sloppy grin on its face. She gave his head a pat and grabbed his collar. “Good boy, Cooper. Let’s go home.”

She followed the dog along the path and out of the woods.

and is also part of Just Jot it January 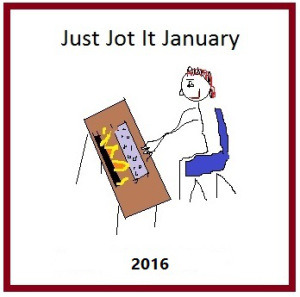